The rapid succession of events that have unfolded in Punjab over the past month have raised significant concern amongst Sikhs around the world. In response, there has been a flurry of conversation about what is taking place but a noticeable lack of analysis regarding the underlying issues and emerging patterns.

Without delving into the details of each individual incident (December 18 beadbi in Sri Amritsar, December 19 incident in Kapurthala and the December 23 blasts at the Ludhiana courthouse) it is clear that the pace of events has been so rapid that each respective incident completely replaced the previous as yesterday’s news.

Immediately following the Amritsar Sahib incident, Delhi’s nationalist media set its course to manufacture a narrative that collectively demonized Sikhs. This incident of beadbi was so clear and provocative to observers however, that even some non-Sikh journalists pushed back against the nationalist vitriol. About 12 hours later, everyone’s attention was then drawn to Kapurthala. This incident began when a video of granthi, Amarjit Singh, went viral. The situation escalated to the point that a large presence gathered, anguished by news of another beadbi. The detained suspect was killed 6-7 hours later in the presence of the police. After this, the incident at Amritsar Sahib was wiped from the news cycle as everyone’s attention became fixated on Kapurthala. Even those journalists who initially challenged the nationalist media gradually shifted towards adopting a similar tone. Within hours, Delhi was able to easily amplify its anti-Sikh narrative.

This was followed by another incident at the Ludhiana courthouse, in which the police claimed that the man who had come to plant a bomb was killed on the spot as a result of an explosion. In the following days, it was uncovered that the man who was killed was recently fired from the Punjab Police due to allegations of drug smuggling. Around the same time, police also arrested Amarjit Singh on allegations that he manipulated a petty theft into an incident of beadbi and spread this across social media platforms. It was also reported that Amarjit Singh was in regular contact with senior police officers, his son was a serving officer in the intelligence wing of the police department, and the nearby police outpost was built on land that he had originally given.

This brief summary illustrates the perplexing complexity of the events that have transpired over the past month. The only way to fully understand the individual events is if we identify the broader patterns and context they exist within. Despite this, we have been largely ineffective in disseminating and generalizing a holistic analysis of our current situation. Reflecting on our reactive approach and the resulting analytical gaps is just as important as analyzing the events themselves. The first step in this process is reflecting on our own tendencies and habits in the face of rapidly evolving events.

The public discourse and social media chatter around each of these events clearly illustrates a common failure to place events within a larger framework and discern the underlying patterns.

The second problem is that there is a massive gap between the realities we consume through the screens of our devices and the actual reality on the ground. The information we receive through our devices is rarely reliable. It is often full of gaps, and leaves us with more questions than answers.

Third, we are often in such a hurry to post our impulsive reactions on social media as though a delay would render life itself meaningless. Most of the time, we don’t even feel the need to verify our information from those on the ground. We accept the mediated information flowing through our screens rather than taking the time and effort necessary to actually understand the realities from those on the frontlines.

that has come to light through all of this, is that

We rarely acknowledge when our immediate reactions are proven wrong over time. Instead, we dig our heels in and continue grasping at straws to defend our original position.

Fifth, rather than analyzing larger trends and patterns, we superficially focus on singular events. When a new event occurs or a new controversy arises, we move on to the next in a constant cycle of repetition. This tendency has become so normalized that we reduce every incident to a simple event. We immediately go about generating uninformed commentary about the event without even trying to map out a larger frame of analysis or understanding the more complex realities beneath the surface.

We have to keep in mind that our generation has never seen such a tense and volatile situation in our lives. Conditions in the international, regional, and domestic arenas are all rapidly deteriorating towards instability as the world is facing a new wave of economic, political, military, and public health crises. Neither Punjab nor India are going to be spared from this process. To the contrary, Punjab is entering into a much more critical phase of its history given its geostrategic position within the region and Delhi’s violent nature.

Sikhs have been mobilizing on a scale that is making waves in the region as well as internationally. Despite the absence of any centralized coordinating structure, Sikhs around the world have attuned their consciousness to the Guru and set historic milestones through solidarity, seva, and resistance.

The victory of the kisaan agitation for example, has sparked hope and admiration amongst oppressed and struggling peoples within the subcontinent while also strengthening our political positioning in the region. In this sense, we have repeated history along the lines of the massive Sikh resistance to Indira Gandhi’s Emergency in the 1970s. As a result of expressing our political will and resolve to resist Delhi’s onslaught, history tells us that after 1977, Delhi set course to target and clash with the Sikh panth. Delhi began a coordinated campaign to isolate and demonize Sikhs in order to prepare the ground for the physical repression and genocide that were to follow. Delhi is now trying to replay this strategy of “call the dog mad and then kill it.” This should become immediately clear to us by observing the Indian media’s response after each recent event pertaining to Sikhs.

At the same time, we must keep in mind that Delhi is not united unanimously at this juncture. The RSS-BJP combine that is currently in power has its own special “interest” in the Sikh question while the liberal-secular bureaucracy and establishment elites have their own approach. Beyond these domestic forces, a number of global powers also have an undeniable interest in Punjab right now.

In such tense circumstances, it is crucial that our analysis and immediate response to unfolding events reflect the gravity and complexity of the circumstances. Each event that unfolds on the ground does not need to be part of some elaborate conspiracy, but in the current climate, everyone with an interest in Punjab and the Sikh world will do their utmost best to bend each incident to suit their own interests and purpose.

The narratives that we impulsively create on social media platforms have real and concrete impacts on the ground today. As a result, social media commentary that is disconnected from reality and a larger analytical framework only complicates things even further. Navigating a situation of such intense volatility is like stringing a bow and aiming an arrow: even a slight misstep or momentary lack of focus will release the arrow towards an unintended target. It is imperative that we remain focussed and cognizant of the stakes, consistently reflecting on our own habits, as we navigate this tumultuous phase of our history. 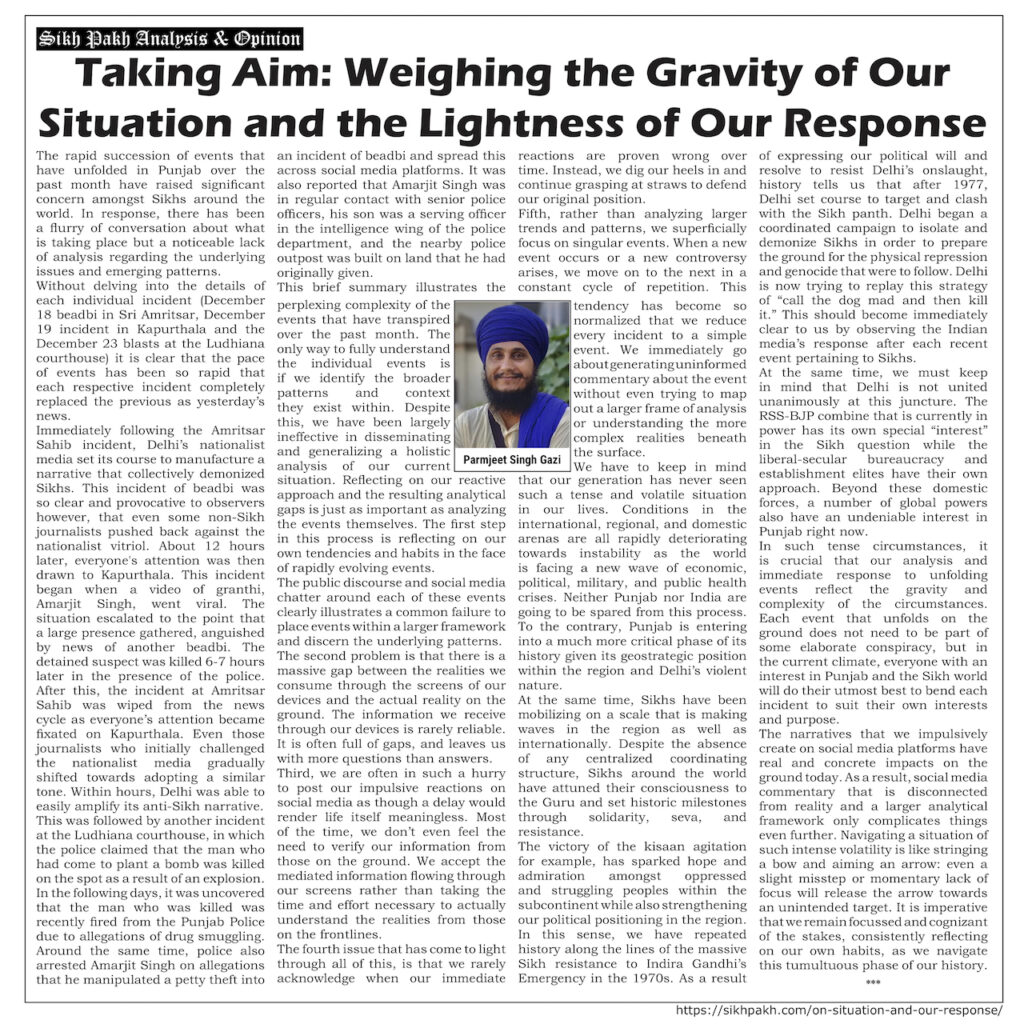 Install this on your iPhone